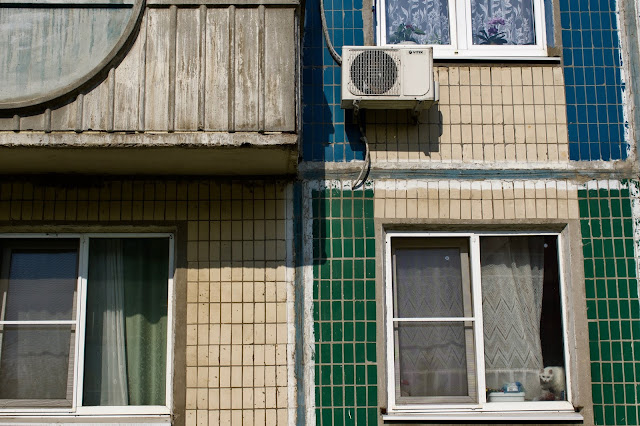 On Saturday morning, Julia and I -- with our sons -- met up and caught the bus to Belgorod's Dino Park. Leo, at sixteen, was less enthusiastic than 7-year-old Ilya, and he was sleepy from a late night, but came along happily enough. We caught the bus just across the road and it carried us the 20 minutes or so to Dino Park -- part of what seems to be a European Franchise as there are Dino Parks in Spain as well as several Eastern European countries. 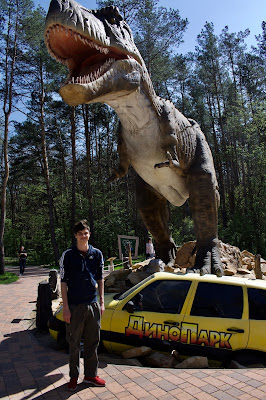 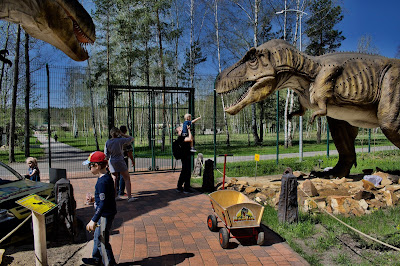 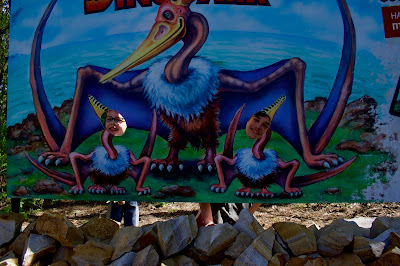 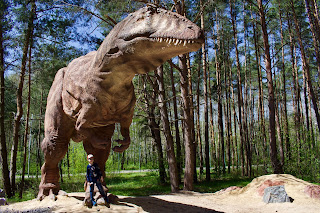 We had a great couple of hours, strolling under the tall pine trees encountering 'life-like, life-sized' models of many different dinosaurs that moved their heads and tails, that gurgled and groaned. We ate pizza in the sunshine and went to a three-D movie that followed the trauma and adventures of a baby tri-ceratops (?). A lot of fun... 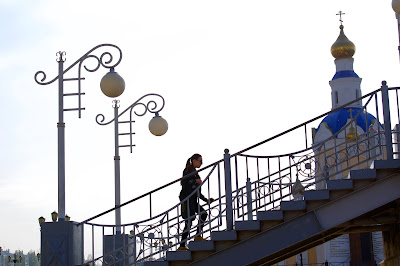 The night before, she had invited me to the weekly meet-up of friends who form the English club. We  had walked up together to the statue of Vladimir, the legendary hero credited with founding Belgorod, which gives a great view over the city. Then we went for a long walk around the southern neighbourhoods -- past the great wooden cathedral, past shopping malls and playgrounds, bus stops, kiosks and gardens -- until it was time to meet in a cafe. 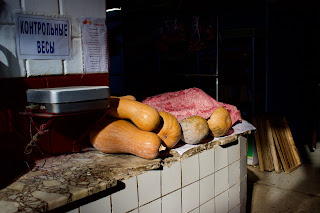 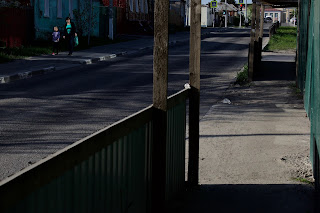 What a pleasant group of people! I chatted for a long time to Pavel and Igor about Cyprus, and about Greeks and Cypriots, and about language. Then Victor, who had been a helicopter pilot before retiring and had lived all over the Soviet Union before settling here in Belgorod joined us, and we chatted some more. I met a young Iraqi man who is hoping to do his civil engineering PhD at university here, and to settle in Russia where he has made strong friendships and created a home. Before I realised it, 10.30 had come and gone and Julia was saying that we had to take a taxi back because we had missed the last bus. Igor gave me his card and said that he would be happy to take us to the museum and battlefields near Kursk if we had time next week -- to text him on Saturday and we would arrange it.

So I did. When we got back from Dino park, I contacted Igor and we arranged a trip yesterday in his little car to Prokhorovka -- between Belgorod and Kursk -- where there is a museum detailing the events of July 1943 and the great tank battles that took place around here.

We met yesterday morning at about 1130, and Leo and I got into Igor's little car with him and Tatiana. Leo was sitting behind Igor -- who is also tall -- with his knees around his ears, a bit like a squashed daddylonglegs. I must remember that if we go in Igor's car again, I should sit behind him, as I am far shorter! The first 30 kilometres were on the wide multi-laned road that leads eventually to Moscow, and we chatted about all sorts of things including infrastructure, work, salaries, and life in general. Then we turned off for 28 kilometres on the local road which was two-lane and less well maintained, "Although," Tatiana remarked, "Belgorod Oblast has much better roads than the other districts. When you go to Voronezh, the road practically stops at the border..."

Igor had been to Prokhorovka a couple of times, so he took us through the field outside of town where many tanks and artillery pieces were displayed. All around us people were climbing on the tanks, photographing their children on tanks, etc... Our talk turned to how best to remember war without glorifying it. Sober topic. We all agreed that creating a notion of heroism and glory led to future generations wanting their own slices of glory, but reached no conclusion about how best to record and remember events in a way that would discourage their repetition. 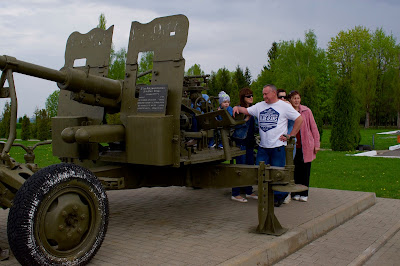 Then we found our way into the village itself and into the very good museum that -- in the English translations, at least -- simply presented information in a clear and interesting way. Tableaux, videos, static displays of events from Barbarossa to 1945 with and emphasis on the events around Kursk. Leo and I also took a turn in a tank simulator which was scary but fun if you could divorce it from what the game was -- blowing up other tanks, which presumably included other human beings. 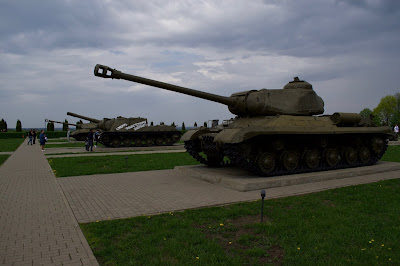 Outside there were more static displays including the tank that Best Beloved had driven during his army service (T-35) and more recent models. Then there was another whole museum dedicated to the development of mechanised vehicles, but we were all pretty knackered by then, so we headed back. 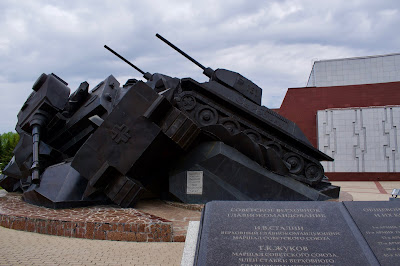 Discussion on the way back was about wages and work. A doctor or a nurse, once respected positions in the USSR, are now poorly paid: "On paper," Igor said, "They would get about 30,000 rubles a month." (less than 500 euros -- could that be right???) "But in reality, they would get about 30% less." The difference is apparently in fees and taxes and kickbacks that get nibbled away. So doctors and nurses -- and teachers, also once highly respected -- are exhausted, underpaid, under valued, and fed up. People work two or three jobs here, patching together livings by working wherever and however they can. Young people don't save becasuse "at least if we spend the money right away, we can enjoy it. There is no point in trying to keep it because someone is going to change a law and take it away from you."

It started to rain just as we arrived in the city, so thankfully we did not have to navigate too much through the puddles. Igor left us off with several plans of what do do next week, so stay tuned for further adventures!
Posted by Asproulla at 11:13 AM