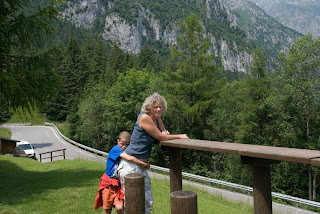 Best Beloved likes to go to restaurants or cook nice meals with local ingredients, drink good wine and visit the places where it’s made, sleep after lunch. His back problems make taking public transport with baggage, sleeping in different beds with different pillows, slow walking (museums, zoos, and window shopping…), and eating off anything but a table uncomfortable at best and with a worst-case scenario that includes stiffness, pain, and a need to spend long periods lying semi-supine on a hard floor. The children are more active but slower paced, thrive in marginal conditions, enjoy the varied experience of public transport, and for the most part do well with slow-paced pedestrian activities. When we went to the Greek islands two years ago I arranged the two-week segment that Best Beloved could be with us in a comfortable pre-booked apartment on the island of Patmos. During the other four weeks, the kids and I took pot-luck with ferries, busses, cheap and cheerful digs, and picnics. 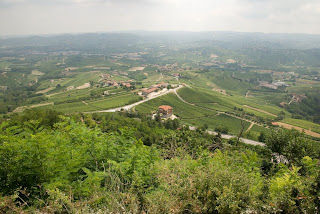 So organising this summer’s Odyssey En Famille and keeping everyone happy was something of a masterpiece. Best Beloved did most of it. Building our destinations around the wines that he was interested in sampling and the fact that I believed that the Big Ones’ GCSE studies of World War One made a trip to Flanders a good idea (I had always wanted to go, too), he trawled the Web for well-appointed self-catering properties that were within our budget range and available between the end of school and late July, when his wine-making activities begin in earnest.

Our first house was in Edine Gaiano, not far from the shores of Lake Iseo . We spent twelve days there, driving around the lake, visiting the wine estates of Franciacorta, and exploring the alleys of Pisogne. All the children enjoyed swimming and fishing, especially on the island of Isola. One day we drove up into the foothills of the Alps. Sophia and I took a trip into Milan by train – despite being barred from the interior of the Duomo (I had wanted to go up to the roof) by not being sufficiently modest in dress, and having to scramble for some necessities, we had a good day out. 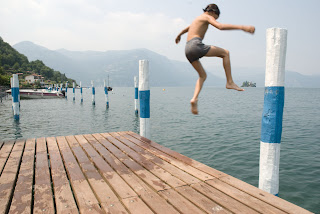 I am not a good passenger on long car trips, so to keep stress to a minimum, we had decided that I would take the train to Beaujolais – our next port of call and the jumping off point for me and the Big Ones to go to Flanders. So Best Beloved drove Zenon and me into Bergamo early one morning to start our trip to Bourg en Bresse. The trip to Milan Central on Trenitalia took an hour. Then we boarded a more luxurious International Express for the four hour journey to Geneva where we waited for an hour munching sandwiches on the platform and finally took the Paris-bound TGV for Bresse where Best Beloved picked us up for the last hour of the trip to Fleurie.

We had stayed in the same house six years earlier, and Monsieur and Madame welcomed us back, fanning flushed faces with their hands and apologising for the heat. The Big Ones and I only spent a night or two before heading for Macon Loche TGV station, Paris, and Lille en route to Poperinge. During our absence, Best Beloved took the Littles to the first class exhibition on winemaking at the Hameau du Vin in Romaneche-Thorins, and on several wine appreciation drives as well as spending time at the TouroPark and the Jardins Aquatique as well as fishing in a nearby tributary of the Saone. When we returned from Flanders (I’ll cover our visit next post) we had only two nights before heading back to Italy, but on one of those evenings, Best Beloved and I settled everyone with pizza and the tv remote and drove to the nearby village of Julienas for a first-class meal.

I had been unable to get train tickets for the trip back to Italy – no seats were available on any of the southbound trains – so I had to go by road. From where has my irrational fear come? Before I met Best Beloved I spent five years driving a right hand drive Toyota van all over Europe and the Middle East – from Cairo to Nord Capp and back via Kurdistan, Baghdad, and Damascus. Now the thought of spending a couple of hours on the Autostrada left me almost paralysed with terror.

“Just sit in the back and read your book, Manamou,” my husband advised. But in the end I was needed as navigator.

Unfortunately Casa di Gallo was not available for the entire remaining twelve days of our holiday, but we spent the final five nights at Wisteria Cottage just a few kilometers away. Wineries in Barolo and Barbaresco notwithstanding, the highlight of the area was, without a doubt, the municipal baths at the ancient spa town of Acqui Therme. 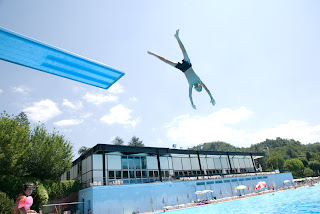 Billed as the largest pool in Europe, its two swimming areas and spacious surrounds easily accommodated 500 people, and while the kids spent literally hours jumping and diving off the boards during the three afternoons that we spent there, Best Beloved swam laps and exercised constantly, thrilled at the therapeutic effect that it was having on his back.

Language? I used to speak passable Spanish and can manage (present tense only) in French, so Italian was challenging but not impossible and we all picked up a smattering -- come on, how hard is 'uno gelato, per favore... grazie!'? In France, Sophia found that her school French -- which includes past and future tenses! -- allowed her to communicate and to understand signs and menus -- only in Flanders were we somewhat stumped by Flemish (and given stink-eye if we spoke French!).

A word about food. Eating out as a family of six on a daily basis would have been prohibitively expensive, but… Italy is the land of pizza, and the most delicious pizza is only about 6 Euros… Best of all, all my children love pizza – the simpler, the better: Margharita with a little extra ham. Lunch? Done.

Fresh pasta and salads and a range of terrific, salamis, cheeses, and sauces – fresh basil pesto, walnut pesto – with a slab of barbequed steak or guinea fowl, or a roast chicken on the side – was on the menu most evenings, accompanied by a bottle (or two) of the terrific local wine – and for Best Beloved’s birthday (yes, I remembered it this year!) a half kilo of pistachio ice-cream to die for. My clothes all seem to have shrunk… I blame the washing machines!

So a family holiday that keeps us all pretty happy can be done. Maybe it’s because the children are all that bit older now; maybe I have mellowed somewhat and no longer hold myself responsible if not everyone has a perfect experience all the time. Next year? Well, let’s just wait and see.

Posted by Asproulla at 7:43 PM No comments: 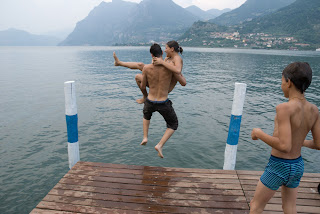 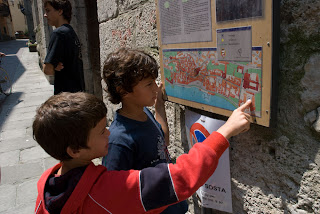 At two yesterday morning we arrived back from our 4-week family Odyssey to the Continent. We had flown into Milan Orio al Serio airport on Blue Air (a Romanian budget airline that is now Cyprus based – our tickets were 6.50Euro, plus tax, each), rented a Mercedes mini-van, and stayed in self-catering accommodation in the Italian Lake District, Beaujolais, Flanders, and Piemont.

We had a good time: ate lots of pasta, drank lots of wine – or at least Best Beloved and I did, swam a lot, read a lot, played many games of cards. The weather was hot, and we had our fair share of moans – a trip that manages to address the needs and desires of adults, teens, and younger children is neither easy nor cheap, but we covered a lot of ground and everyone came home wiser.

Italy was surreal: as Sophia and I decided after our one day trip into Milan – we could not send a letter from the post office, we could not buy an International train ticket from the train station, we could not cash Travellers’ Cheques at a bank or Bureau de Change. Seeking information we were shuttled from pillar to post in a charming but frustrating manner, and what was supposed to have been a ‘girls’ bonding trip’ involving cafes and boutiques turned into scavenger hunt for stamps, cash, a bathing suit, and a ticket for me to travel from Milan to Macon the following week.

In France, Best Beloved sought the ultimate Beaujolais in the vineyards surrounding Fleurie with the Littles in tow, while I took the Big Ones up to Ypres to visit the battlefields of Flanders. We stayed at Talbot House, an everyman hostel that catered to all ranks during the Great War and now houses a poignant museum, and completed a 45 kilometre-cycle tour of trenches, cemeteries, and landmarks – leading Sophia to swear that she will never ride a bike again.

Back in Italy we stayed in two lovely houses in the Piemont region sipping Barolo, nibbling cheese from Roccaverano, and waiting for the Alps to reveal themselves from behind or beneath a haze of humidity. Finally, on one day, they did – a majestic and still-snow-covered arc that spanned the horizon. We agreed that May or October would proabably be a better time to visit. But would cooling off in the giant municipal pool down the road in Acqui Thermi been as welcome a respite in the cooler months? Would pistachio gelato been as delightful?

Leo managed to end the holiday on an appropriately surreal note by locking himself in a toilet stall in the airport as we prepared to fly out. Poor bambini! The service personnel had to break down the door to retrieve him, and he spent the rest of the trip warning us each time we visited the bathroom.

Then, after landing at Larnaca, our Scots captain David Blaney, who had flown us to Milan four weeks earlier, invited Zenon and Leo into the cockpit and explained the workings of the radar, the auto pilot, and a host of other buttons, screens, and levers. Zenon emerged with a grin as wide as the Po Valley and a new-found ambition to become a pilot.

Over the next few weeks I will post separate stories of our adventures as well as some pictures, as one post is not nearly enough to do justice to our adventures.

Posted by Asproulla at 2:44 PM No comments: