Greening up the Place 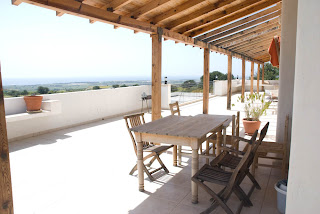 With respect to growing things, I’ve always said that if I can’t eat something, I’m not interested in planting it, but now that I have the vegetable side of things proceeding well, I am finding an increased interest in beautifying the surroundings with plants… in other words creating ornamental gardens.

The first place to get my attention was the back verandah. While I love the space (great for skateboarding, cricket, and running races), its clinical starkness, broken only by a stringy basil plant, has always depressed me. So Best Beloved and I focussed on it a couple of weeks ago with the idea of turning it into a sight more soothing to the eye rather than a cross between a runway and an operating theatre.

‘This end,’ he said rather pensively, referring to the far end off the sitting room. ‘I’ve been thinking of enclosing all together. We could turn it into a winter sun-room, and shade the windows in the summer with big blinds…’ So we left that end for now and concentrated on the kitchen end.

We’ve been considering a big barbeque to replace the foukou (Cypriot grill) for some time, but deciding the location took some haggling before we decided to site it around the side of the kitchen. There’s no point in having a view like ours if you go and block it with a barbeque, and the side is convenient to the kitchen and dining room, and downwind 95% of the time. We deferred the construction for a while, but moved the foukou to its new spot. 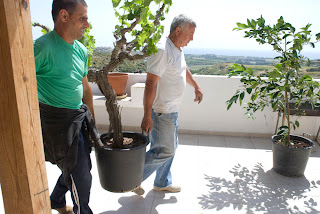 Next… ‘I’ve been thinking of some big pots with maybe a bay tree and a lemon near to the back door,’ I began tentatively.

‘A lemon tree in a pot?’ Best Beloved roared. ‘They’ll never stop laughing at us, Manamou!’ But he wants a lemon tree, too, so the idea took root. 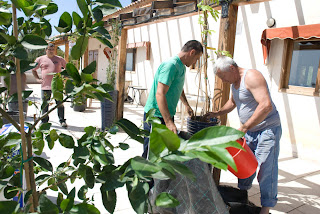 ‘Then tall pots, like the ones we saw at Green Forest last year,’ I continued. ‘One for each roof support…’ He warmed to the idea more and more and before I knew it we were at the nursery choosing pots and plants, and arranging to have them delivered that very afternoon. 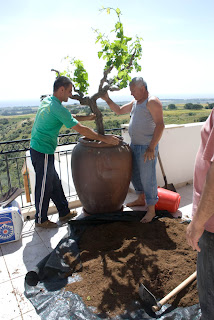 Two days after the plants were installed a vicious wind tore all the leaves from the lime – he chose a lemon for near the other door and planted it, to save his reputation, in the ground – and withered the wisteria and the jasmine. But nurturing and plenty of water has put new life into them, and looking out of my kitchen window is now a double pleasure: I see both the wonderful view down the valley to the sea, and the gentle waving of healthy greenery. 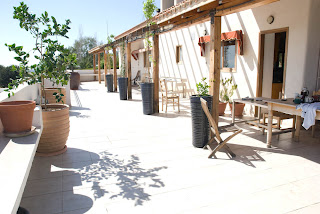 Now to look out for the side garden.
Posted by Asproulla at 4:42 PM 2 comments:

Alex and I had a medical morning.

Last night, while sparring in Tae Kwon Do, he kicked someone who used his elbow to block. Elbow connected with instep, and Alex was worried that he had broken a bone in his foot.

Although I knew that there is not much that can be done for him – he was walking, albeit painfully, and he said that some movements made him feel sick – I said that I would take him to the nearest private hospital, Iasis, for an x-ray after dropping Sophia at school. I didn’t want to face the bureaucracy of the General without Best Beloved to smooth the way.

So at 7.30 this morning, we rocked up to Casualty under the sign ’24 Hours’. Casualty was empty. We went around to reception and I explained our mission. “Oh, you’ll have to wait half an hour or forty-five minutes”, said the receptionist. “Staff aren’t here yet.” Alex and I discussed waiting or checking somewhere else, and the receptionist helpfully said: “And we’re closed between noon and four!”

“What,” I asked her “happens if someone needs an emergency x-ray at lunchtime?” She didn’t understand.

I called Evangelismos (another private clinic), but their radiography department wasn’t open until eight, either. We opted for the General Hospital, and I checked my wallet to make sure I had the ‘Poly Techni’ card, the card that says that as a family of at least four children we are entitled to free state medical care. Only problem was we are not pre-registered at the hospital for any care, and previous experiences of the State medical system did not bode well.

“Prepare for a Cultural Experience!” I told my son.

“Beats school,” was his answer.

We drove to the General, but could we find parking? One would think that in designing a new hospital for a mushrooming town fifteen years ago, the architects would have made enough parking spaces, but no. We parked on the street 300 metres from A&E. Once in the door into the empty department, I said to the nurse under a sign marked ‘Triage’: “ I need an x-ray for my son; he thinks he’s broken his foot.”

“This boy?” she said. “The one who’s walking?” But we filled out the forms, showed our poly techni card, and almost immediately were seen by a doctor who poked the lump on the side of Alex’s instep, grunted, and motioned down the hall to the x-ray department.

More forms. “Can you tell us how long we’ll be waiting?” I asked the receptionist. “Not long,” she assured me. “There’s just one ahead of you and then they’ll call you.”

We sat on the slatted wooden benches and looked around the crowd.

Most of the patients were older people from the villages. Neatly dressed, well groomed, and bearing themselves well. None looked ill; there were no emergencies here, just routine visits requiring endless waiting on the hard chairs, a gossip with neighbours and friends from previous visits. There was some good-natured grumbling about how ‘we could die in here in turn waiting to be seen’, but by and large people waited quietly. An electronic counter on the wall proclaimed ‘Your turn’ but the number space below was blank. A hand-lettered sign on the wall notified us that if we missed our turn for any reason, we would have to reregister. People kept coming in, going to the desk, signing in, sitting down. The room grew stuffy.

Lise’s mother-in-law arrived for her weekly check-up, immaculate in her widow’s black, gold cross on her chest, each grey curl in place. She recognised me and we chatted for a while but I found her rapid Paphos dialect too fast to follow properly and she smiled and turned to the man at her side who was from the same village – but not before inviting me, with the infinite hospitality of the Cypriot villager “To come some time with Lise and drink coffee with me at my house.” I assured her that some day I would.

After an hour Alex went to the desk. “Can you tell me how long I’ll be waiting, because I’m missing school?” The woman shrugged. “God knows.”

An elderly woman emerged from the corridor leaning on a stick. “I was the first,” she announced. “They’ve only just started on the queue down there.”

“Mum, let’s go,” he said. “You won’t be charged because although we’ve signed in, I haven’t had a procedure, and this is just a waste of time!” I looked around at the handsome, patient faces in the waiting room and had to agree with him. We weren’t retired with nothing else to fill the day, but I hated to leave the foot unattended.

As we walked across the parking lot, Alex winced again. “Maybe we’d better go to Evangelismos,” he said. “They’d be open now, and where the doctor poked me, my foot really hurts.”

A young man in blue scrubs was behind the desk at Evangelismos A&E. He took Alex’s details and an elderly doctor made a quick exam. “Might be broken,” he said. “X-Ray’s down the hall.”

We didn’t wait at all. The Bulgarian technician took Alex straight in and, spotting Alex’s uniform quizzed us while we were waiting for the pictures about Alex’s school. We had to wait a while for the radiographer to confirm no fracture, but chatted with the receptionist – who turned out to be a paramedic friend of SH who taught my Emergency Care course last year, and also the man who took such good care of my friend Angela when she had a mini-stroke last year. Angela had sung his praises to me several times: how patient he was with her, and how reassuring. I was glad to be able to pass on her thoughts.

I dreaded the bill. Private hospitals have a reputation for charging the proverbial arm and leg, but the doctor waived his fee, and when he heard that we have only in-patient insurance, the receptionist charged us only for the x-ray and the bandaging. We paid only 44 Euros – less even for when SH brought me in in the ambulance during the course for a dicky heart after a hornet sting.

Alex tried to weasel out of returning to school but I wouldn’t let him. I did let myself off the gym, and three and a half hours after I’d left the house, walked in the door to face the breakfast dishes.
Posted by Asproulla at 6:29 PM 1 comment: