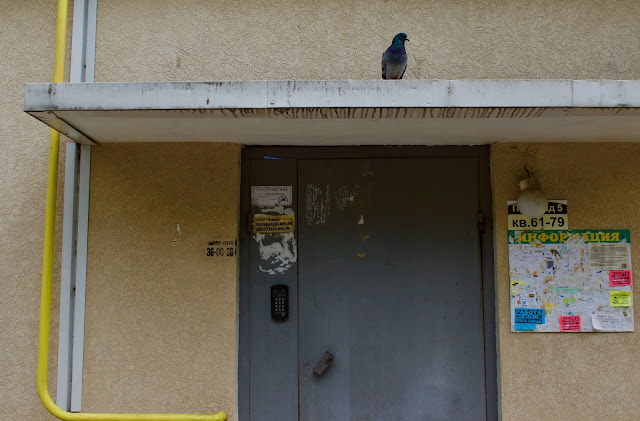 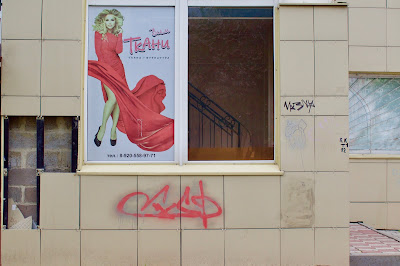 Taking down the garbage yesterday morning, I did a final round of the neighbourhood to see it through eyes that have grown familiar with their surroundings over the last two weeks. I said goodbye to the pigeons and playgrounds, the shop-fronts… and the bakery that I have come to know.  The bakery — purveyor of wonderful sweets and savouries… Leo has survived on their sausage rolls — at least two a day — as he grimly holds out against culinary adventure despite his choice of profession. 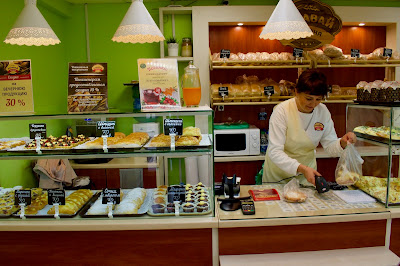 The Sergei came to collect the key and we met Julia and Ilya who took us to the station. Once there, I resumed my search (fruitless so far, but let’s see what Paveletskaya Station and Domodedova Airport yield) for Putin mugs and calendars, and they accompanied us across the tracks to the train, found us our carriage, and settled us inside. We were early, so they stayed chatting, until we suddenly realised that the train was moving.

There had been no warning, no whistle, not even a slamming of doors to alert non-passengers to leave the train, and even though we were moving little faster than an arthritic snail the young wagon attendant refused to try and stop it. Poor Ilya… I have seen plenty of children’s tears, but none that actually spurted… When he thought that he and his mother were trapped on the train, he howled in panic. 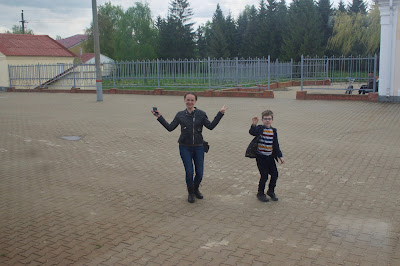 Eventually the attendant admitted that she was inexperienced, a student hired to fill a gap, and set things in motion to put Julia and Ilya off the train at Prokhorovka, half an hour down the line. They would get back to Belgorod by taxi, and no, they would not have to pay. Ilya settled down to use a drawing programme on his mum’s mobile, and we discussed the learning opportunity for all that this situation gave: the girl to be more responsible, Julia how her moment of fear transmitted to her son, and Ilya that yes, things happen, but there is always a solution and situations can often be turned into adventures. (They made it home without a problem and soon all the kids in the building knew — probably with a little embroidery, but that’s what story telling is about, right?)

We arrived in Moscow to rain at about 8 o’clock, found out hotel (The Come Inn — a little clinical but very clean and with a great shower but no towels), and went out for pizza, Apart from sausage rolls, Leo’s Staff of Life is pizza, and both Papa John’s and Dominos are around the corner. Choice, eh? 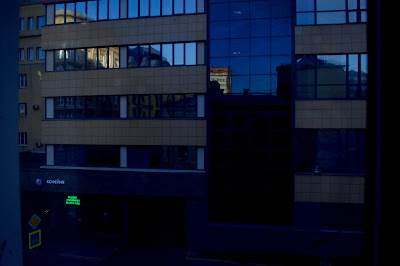 The alarm just rang, so we have an hour or so to pack, get breakfast, and get to the train station before our flight…

Little White Donkey over and out… For now.
Posted by Asproulla at 7:58 AM No comments:

No Break in the Weather 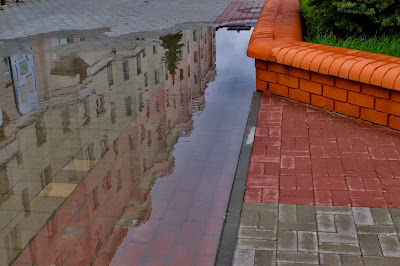 Today was another cheerless day, but I went on a long walk this morning photographing Belgorod in its puddles. I do not like sticking a camera in people's faces, nor do I like 'stealing' pictures on the street, so I often try and make use of reflective surfaces... There are a lot of puddles around. 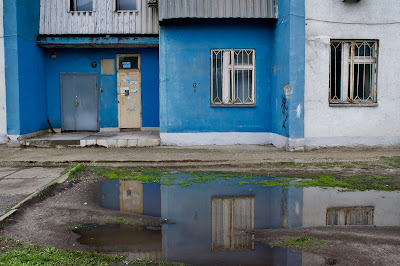 And Victory Day is approaching. Every May 9, parades fill even the smallest village marking Russia's role in the defeat of Nazi Germany at the end of the Great Patriotic War. Flags are sprouting everywhere, posters appearing in shop windows, the flower beds around heroes' statues are being weeded and pruned and generally spruced-up. The honey shop is not staying out of the fun! 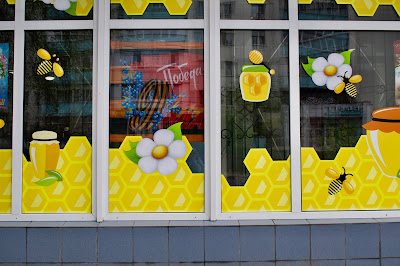 We leave tomorrow morning. The landlord is coming for the key and Julia is showing us the bus stop for the railway station -- unless we decide to walk there. Then we have a seven-hour journey back to Moscow, a night in a hotel, and a morning flight home.

"How do you feel about Belgorod now?" Julia asked me when we met for coffee at Kalypso at around 11. "Are you comfortable here, or is it still new and strange?"

My way of being a tourist is to explore on foot. I don't usually go to churches or statues or 'must-see' itinerary stops on the visitor trail. Far better for me is to walk or take public transport, visit the markets, and experience people's interactions with each other and with me. Except for the incident yesterday with the water, Belgorod has been a wonderful city to explore. Tourists -- foreigners generally, except for the smattering of students -- are remarkable enough to be a novelty, and people were most of the time welcoming, friendly, curious, and helpful. Julia's friends from the English club (you know who you are if you are reading this!) were fantastic. Your hospitality made this time very special. I hope that I can repay it if you ever come to Cyprus.

"It's still new and strange," I answered. "Mostly because of the language. But it is not at all uncomfortable." 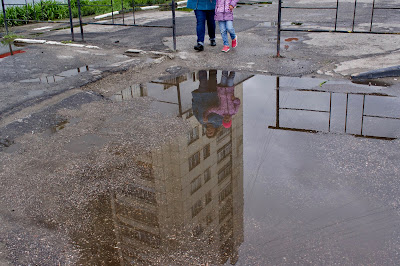 And I would very much like to come back some time. 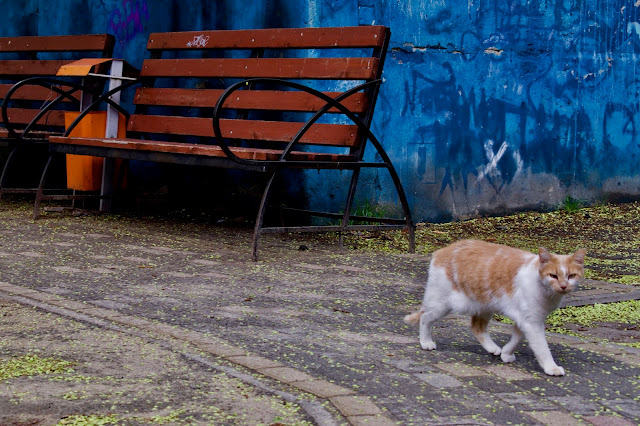 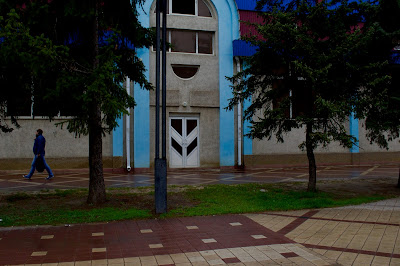 Chilly air and rain have replaced sunshine over the last two days. Yesterday, Leo and I stayed in. I was reading and studying and doing some relaxing, and he was just hanging out, but this morning, weather notwithstanding, I could stay inside no longer. I put on my boots and jacket and headed for the Great Outdoors.

The forecast said that it was 7C (‘feels like 4C'), and that was ok until it started raining. Usually when I walk, I look for light — or for places that make interesting backgrounds for life to unfold against — for photographs. This morning all was pretty flat and grey. I took a circle route up to the market and bought some vegetables to add to the lentil stew I made yesterday. 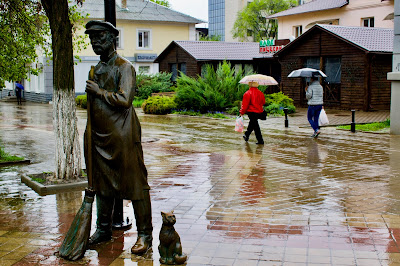 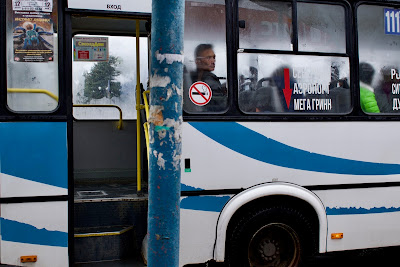 In the market I chatted with the lady who sold me fruit and vegetables, and I took a random picture, then started to move on. Luckily I had already started to tuck my camera into my jacket when someone poked the canvas awning above my head and dumped about 5 litres of water on top of me.  “Maybe it was an accident? Co-incidence?” I hear you ask. I don’t believe so. The timing was too perfect — just as I was stepping there, a canvas roof sheds its load of rain? When I haven’t seen this happen at all at any other place in the last 20 minutes? I think it was the old guys selling znatchky and bric-a-brac behind me — they gave me funny looks the last time I was there.

I didn’t even break step, just walked on as if nothing had happened. I figured that any sort of response would give whoever did it what they were looking for. My hood was up, and the camera was covered, so there was no damage done except to my sense of well-being. I had been in such a good mood since talking to the veg lady…

Igor picked us up outside our apartment at 11 and we met Julia and Ilya as well as Tatyana and Inna at the art gallery. I hadn’t been to a gallery for years, so I really enjoyed walking around and looking at paintings. Having Ilya there reminded me of taking Alex and Sophia to the Palia Ilektriki in Nicosia when we were homeschooling. I tried asking him what paintings he liked, and how they made him feel, but my Russian is not really good enough. 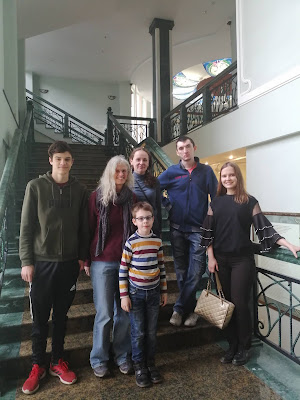 Then we went to a coffee house with some very delectable cakes — salted caramel cheesecake — yum! Everything is 50% less than in Cyprus, so sweet treats like this are easily affordable. We chatted about all sorts of things: America (which I cannot give much information on!), travel, things to see, places to go.

I am sorry that we only have two more days here, but Leo is not. He doesn’t like the cold and is desperate to get back to his computer… 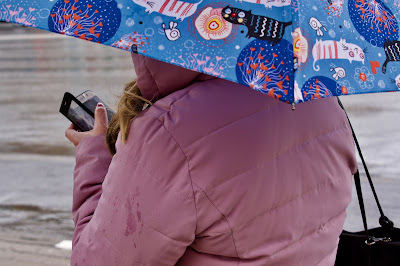 Posted by Asproulla at 3:51 PM No comments: