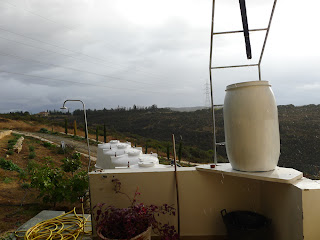 And the system is working – or seems to be from what I can see... 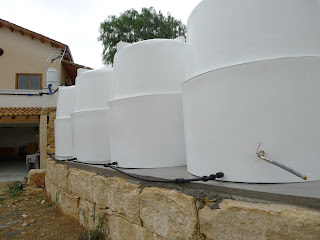 Best Beloved took a weekend last month and we connected all the tanks together at the bottom, leaving a reserve of about four tons should there be a need for firefighting – not that four tons would make a big difference, but having a reserve also helps with cleaning and leaves room for sediment to settle out. We cut a hole for the outlet to which we can connect a portable electric pump (we looked at a permanent solar pump, but it was not cost effective), and connected a tap. 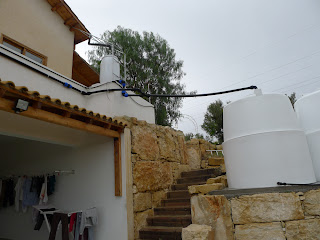 And then my dear husband climbed a ladder and installed air locks on the top of each tank. And then my dear husband fell off the ladder... Yes, he did, from right at the top of the tank – about 2.3 metres up. And he's a big man, so when he falls it is with a thump. A large black bruise graced his hip for ten days, and he felt distinctly like he needed realignment, but there was no permanent damage. 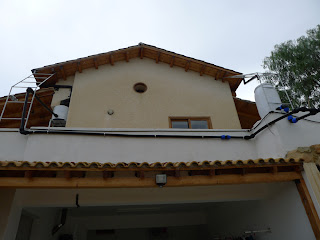 After that came the difficult part: connecting the guttering to the tanks. We used 63 mm hose – and fortunately we had enough lying around that we did not have to buy it – and created a sloping route for the water to flow from the collection/filter tanks that contain gravel and are positioned under the downspouts, over the outside steps, and into the tanks. The hose is heavy and hard to force into the connecting pieces, and two of the connections were in places where BB could get no leverage at all. Watching him, I was terrified that he would fall again because he had to balance high on the ladder that was in turn balanced on the stairs – and both hands were occupied with forcing the hose into the join.

Ugghh!! We were both glad when it was over. It's butt-ugly (no pun intended), so we will need to do some plantings to disguise, or at least soften the starkness.  But first let's see how it works.

Rain has fallen steadily since Saturday afternoon, and the gutters have been doing their job. Standing beside the big tank, I can hear the satisfying drumming of water falling steadily inside, but the tanks have not yet filled to the reserve level, as when I open the tap at the end of tank four, nothing comes out. 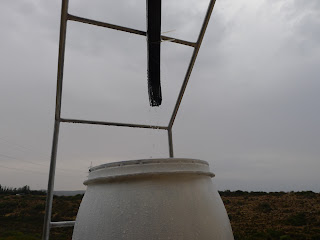 I took the olives this morning.  We have far fewer trees than two years ago, and this time of the year no longer holds the stress of years past.  It could almost have been called a doddle ...

The picking was a bit of a rush job as I wasn't planning to pick for another fortnight.  Then I noticed that much of the fruit had begun to change colour from green to purple, and the ones that I was going to use for eating either needed collecting or nets under them, and I knew that a decision had to be made... But next weekend Best Beloved is away in London, and it's Leo's ninth birthday party.  NOT a good scenario for an olive harvest.

So I put Alex and Leo to collecting the fat black ones that will be stored in brine, and while they were doing that, my brother-in-law came by to show us the new gadget that he had brought for harvesting his grove:  a whirly picking machine that runs off the battery of the tractor.

Alex kinda liked the idea of using that, and he managed to get his friend to come and help.  "Don't start the job if you think you might not finish it,"  I warned them.  "It needs to be done by Sunday so that I can take them to Anogira on Monday and we're first through the press."  Although Oleastro, the olive plantation and mill in Anogira village is organic, they handle other people's olives which aren't, so to keep the label 'Certified Organic Cold Pressed', I need to be first through in the morning.

They assured me that they would finish, and indeed they were by yesterday at around four.

This morning I loaded up the Land Rover, and after everyone had gone to school and Sophia had arranged a lift to her first set of entrance exams (terrible mother that I am, I had forgotten them!) at her old school, I set off through the beautiful morning.

Some serious fires burned on the slopes up to Anogira last summer.  Huge tracts of scrub were reduced to charred sticks and timber, and several houses and livestock corrals were saved either through the luck of a shifting breeze or the tenacity of residents and firefighters.  Burns stopped almost literally at the walls.  Must have been seriously scary.

I arrived at eight, put my 161 kilos of olives through the mill, and emerged an hour and a half later with 30 litres of oil. That should see us through the year.