We started out driving to the Eko Station which was one of the camps in the Idomeni area. It is hard to believe that this motorway station, on the arterial road between Skopje and Thessaloniki was, two years ago covered by tents; that children ran about and played around cars filling their petrol tanks; that tens of thousands of desperate people pushed through here on their way north. But it was so. 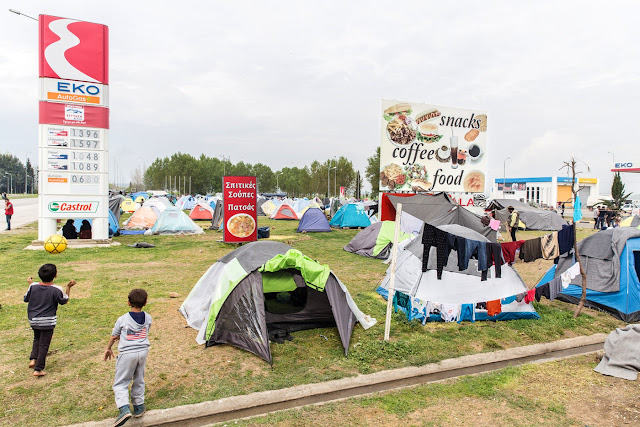 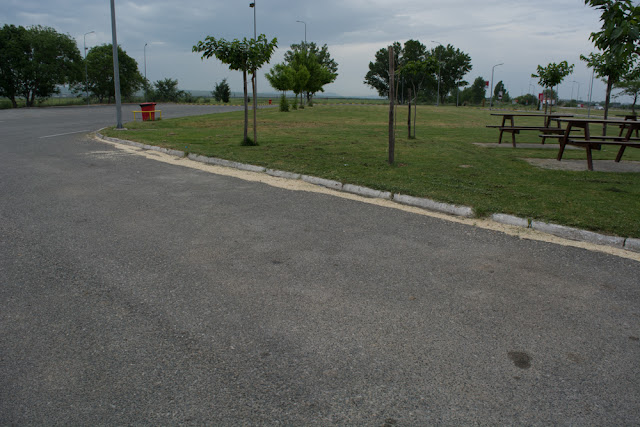 It is hard to imagine, from our comfortable hotel rooms, with showers and dining rooms; from our relatively easy walks carrying day packs, with a bus to back us up if we get sick or tired, how it would have been for those tens of thousands of men, women, and children -- carrying what they had left from their flight, eating what they could find or were given, wearing dirty clothes, ill-fitting shoes -- it is difficult to imagine what they went though; the pain, the fear, the uncertainty.  They came flooding through slightly earlier in the year than we are here now, the sun may have been a little less hot (though we were blessed with overcast and a breeze for much of the day), but the road was hard and the days were long. Still they came, and they kept coming -- only to be brought up short at the Macedonian border.

Our first walk was a 3 km ramble through country lanes. Poppies, redder and larger than those in Cyprus filled the edges of the fields.  All through the day we saw smears of scarlet through the green of ripening wheat, grass, other crops -- truly spectacular... 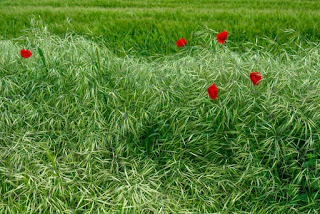 Our destination was a nearby Lidl, where many refugees stocked up with supplies. We did, too, then boarded the bus for Idomeni. The village is quiet now, but the border area immediately around it is still sensitive, so after a coffee in the village kafeneion, served by cheerful though bemused women and watched by some doubtful soldiers, we greeted the one living soul in the railway station, a hungry but timid young dog, and set of AWAY from the border and into the hills. 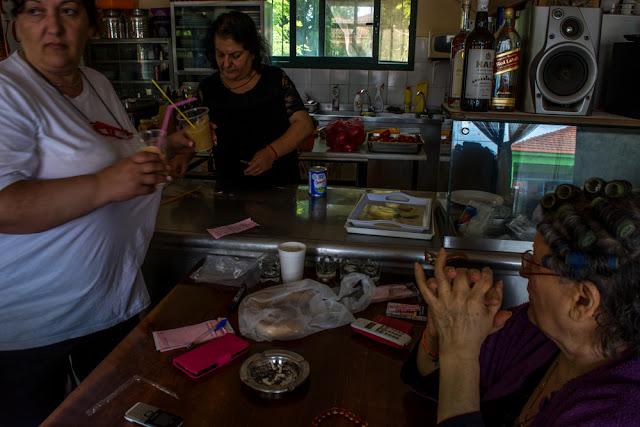 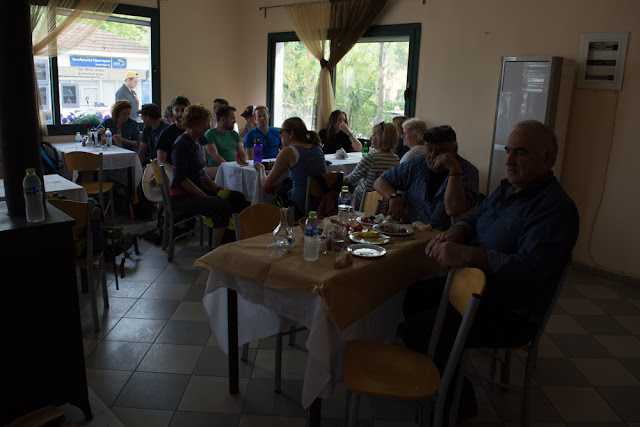 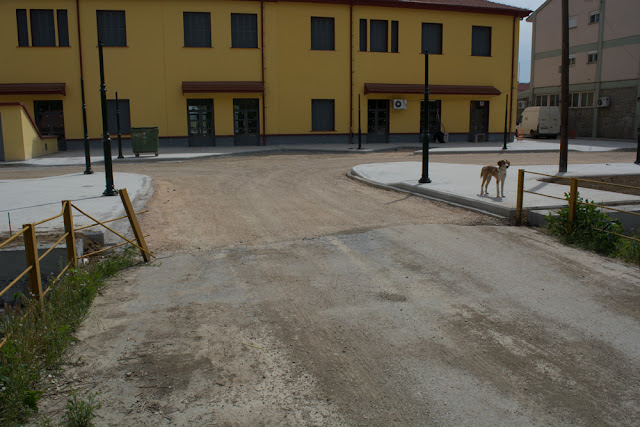 We had a bit of a detour, through 'undulating' country – that seemed to mostly undulate in an upward direction for quite a few kilometers to the village of Skra, where we had lunch, and later walked to look at some waterfalls. I counted about 232 stone steps on the path up. By this time we were all feeling our feet. Or as if we didn't have any feet.

Then we boarded the bus and drove to Kilkis. Tomorrow, we cross the border.

Wifi is really bad here. I want to post some 'before' and 'now' pictures of the Eko Station and Idomeni, but it might not be possible.
Posted by Asproulla at 9:45 PM No comments:

RyanAir was delayed.  For some unaccountable reason we sat on the tarmac at Paphos airport for 40 minutes before taking off, which made us late landing, which meant I missed the airport bus and had to take a taxi -- but I got to the rendezvous point and met the rest of the walkers before our Macedonian coach came to whisk us off to our hotel for the night. My back complained at the long sitting, but has given no overt twinges.

I still don't have names matched to faces, for the most part.  Our Fearless Leader Eleni and Doc Heather are the Skyline crew members whose jobs are to shepherd us from point to point and keep us safe and healthy -- young but experienced, they briefed us last night at dinner about things like border sensitivity, the route that we will take, care of feet, dehydration, and hygiene. Paul, Bea, and Rana, are founder and trustees of the charity that we are supporting -- Refugee Support Europe -- which was actually born here, in Alexandria (about an hour's drive from Thessaloniki), when the army opened a camp to take the pressure off Idomeni in May 2016.  My room mate is Christa from New York.  Others, I will introduce as and when...

Hotel Manthos, where we are staying, has been a rock, a lifeline, and a home away from home for countless volunteers over the last few years. Anna, the proprietor, is one of those Greeks who has really stepped up -- like the islanders and the fishermen and the countless other nameless people who showed their humanity by opening their hearts to the desperate people who flooded into their already struggling country. As well as supporting volunteers, she opened respite rooms for free to women who had given birth -- by Caesarean -- in the local hospital, and had to leave at the end of the day.  Some stayed for over a month.  She spoke to me in fluent, if careful, English, and broke into a huge smile when I told her I speak Greek. "But where did you learn?" she asked. "I live in Cyprus," I said. "Twenty-five years!" "Why then, you are Greek!" was her answer... I winced, on behalf of every Cypriot who stands up for their Cypriot-ness in the face of Greek or Turkish nationalism, but there was no point in saying anything, and I was helpless in the tide of her warm hospitality.

It is now just after 6 a.m. I have been awake for over an hour, and my alarm has just rung. Breakfast is at 7, and we will be off at eight on the first leg of our trip -- a visit to the Petrol Station camp, and a walk to Idomeni. Because of sensitivity around the border, we are not crossing into Macedonia there, but rather hiking away from the camp itself and transferring by bus to the border. I am sure Skyline doesn't want any of us getting beaten, shot, or teargassed as the Macedonian border police and army were happy to do with the thousands that tried to pass two short years ago.

Anyway, onwards! Must get this show on the road... More, and of course pictures, to come....
Posted by Asproulla at 6:26 AM No comments:

Well, well, well... Here I am again after a long silence... Are any of you left listening? You loyal readers who followed my adventures as a housewife, mother, farmer in rural Cyprus?  If so, here's a whole new adventure for you to join me on... The Little White Donkey has packed up her faithful rucksack and day pack and is sitting in Paphos Airport waiting for a flight to the Greek city of Thessaloniki.  With a like-minded international crew, she will be tracing the refugee trail from Idomeni on the northern Greek border, to Skopje, the capital of the Former Yugoslav Republic of Macedonia.

She doesn't have the necessary tech skills to include a selfie, so just imagine a crowded airport, the hot sun outside, and a RyanAir jet getting ready for take-off.

I nearly didn't make it. Two weeks ago, my back freaked out leaving me unable to drive -- or even sit comfortably for 10 days.  A magic treatment from Barbara Jones, Feldenkrais exercises, and a beautiful massage left me pain-free this morning, so it's all go now.

And a wonderfully generous anonymous sponsor gave me a last minute boost of £100...  It's not too late, friends... https://www.justgiving.com/fundraising/rachael-pettus

They are about to call my flight, but watch this space for words and photographs from the refugee trail.
Posted by Asproulla at 2:07 PM 2 comments: