The Smell of the Wattle

We had our first rains last night -- the first of seven -- no, eight -- months. They were not torrential, they did not scour away my earthworks. But they dampened the ground and they settled the dust, and oh, their fragrance!

Now we are praying for a respite, for clear skies and a dry tomorrow. For tomorrow is The Party. In honour of Hallowe'en. And if everyone who's invited comes, more than one hundred souls will be feasting here tomorrow. School friends of Best Beloved from Nicosia and their families, friends of Alex and Sophia, of Zenon and Leo. Cypriots, English, mixed marriages... 'The whole' (as Kazanzakis's Zorba) would say, 'catastrophe!'

The first rains always remind me of this poem by Kipling. 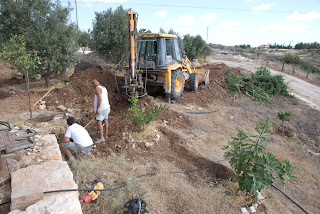 Well the diggers have moved out after a week’s tearing, grinding, chipping, and placing of rocks, and I am left with a whole new canvas on which to work magic… or totally screw up.

As my long-suffering readers know, I am on this new kick of rainwater harvesting. Cyprus is not short of water – if it’s collected and used prudently. But there is no infrastructure outside the big dams for rainwater harvesting, and when the rain does fall here (sometimes torrentially between November and April), much of it just slides off the saturated land, tearing off topsoil and staining the sea for hundreds of metres. If that water were captured and either stored in the land in the form of passive earthworks or stored in tanks like it is in Australia, problems of erosion and increasing desertification would be slowed down, there could be a lessening of summer water rationing, and costly oil-driven desalination plants might not need to be rushed into production.

But all that’s wishful thinking on a national scale. All I can do is work on my own little patch.

As I mentioned in an earlier post, I have been constructing berms and basins -- a la Brad Lancaster’s suggestions in his excellent book Rainwater Harvesting for Drylands and Beyond – around the trees in the field. I have been trying to do two trees a day, but a week’s cold held me up so I am 14 trees behind schedule and still have around another forty to do. Each tree needs to have the soil and organic matter – leaf drop, old compost, straw – cleared from trunk to drip-line, then a berm about a foot high constructed on contour at drip-line to catch the run off from irrigation and rain and hold the moisture to let it slowly infiltrate the soil. After I have cleared the soil around the tree, I put a layer of cardboard to help keep down the tenacious, pernicious, and down-right ornery, hard to eradicate rhizome grasses that grow wherever there is moisture, then I add a layer of compost and straw to hold the moisture when it arrives. Look at the calendar: we’re nearly at November and rain has threatened a few times. I am trying to get as much done as possible before I have to deal with mud and run off and all such work grinds to a halt. 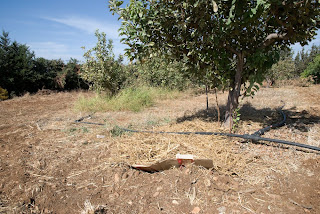 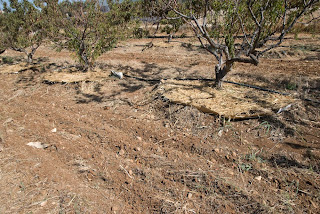 But the diggers weren’t working in the field. Oh no! They were following a long-laid plan nearer the house to terrace the slope below the olive grove/kitchen garden, where previously a haphazard line of boulders had delineated the beginning of the long drop to the gorge. Then they carved out another terrace on the edge of the property where a road/fire-break – its outside edge to be planted with prickly-pear cactus as another precaution against fire – will circle the house below the retaining wall, giving us almost 360 degree vehicle access to the house. 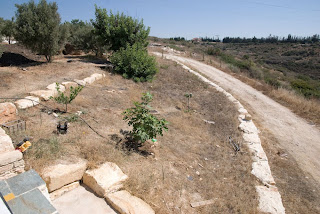 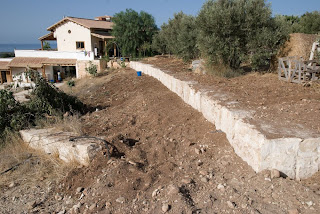 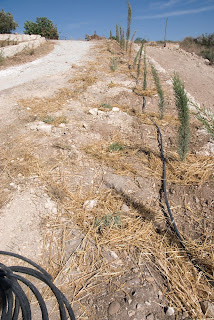 Then Best Beloved decided on a line of Cypress trees above the road – Tuscany comes to Paphos – under-planted with rosemary, lavender, and dryland ground cover (all also bermed and basined and mulched to catch rainwater and divert run-off from the driveway). I finished that this morning, having enjoyed Leo’s invaluable assistance all weekend.

The trouble is that while the diggers did the big earth cutting and rock moving, they left me with the smaller ones. Alex and I have started building dry-stone terraces, again following Mr Lancaster’s instructions. Thank goodness for strapping teenage sons! Alex has willingly schlepped rocks and cut balks to my instruction. If these terraces succeed, thanks will be largely due to him. If they fail, the responsibility is mine – but I will have climbed many steps up the learning curve. 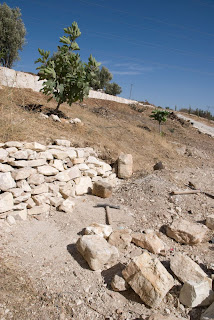 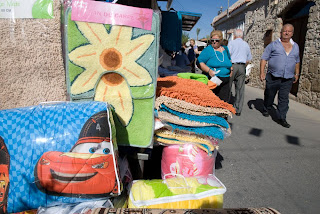 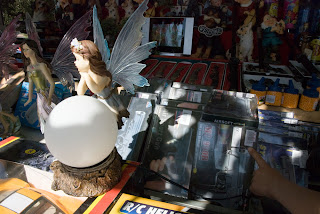 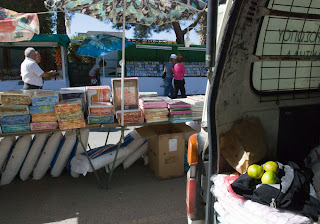 Today is the name day of Saint Loucas, and Loucas is the patron saint of Kouklia village (where the Littles go to school). Thus, all weekend and tomorrow, a Panagiri, or saint’s festival is happening in Kouklia. And of course we had to go: tradition must be observed.

Panagiria are great people magnets – I haven’t seen such crowds in Kouklia’s lanes for a long time. They’re mostly older folk from, the hill villages or children in search of cheap toys (that’s why ours clamour to go: they buy their guns there. I won’t buy guns, but I don’t forbid them, so Zenon and Leo save their pennies and head for the toy stalls with everyone else’s Littles…), but for three days and nights, the village hums. 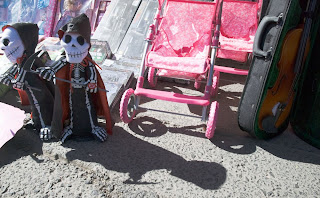 I used to hate seeing the bags of goldfish and rows of caged songbirds that were prizes in cheap games, but those seem to have disappeared (EU directives on animal cruelty, perhaps?), but I enjoy panagiria for their unbridled local colour and the endless juxtaposition of anomalies.

Where else would you see an elderly woman trying on a lacysilk slip over her housedress, her friends encouraging her, pulling it down, patting it, smoothing it, “Maria mou, it looks lovely on you…”? Or housewives picking up the lid of a handmade glazed clay cooking pot (the kind that Best Beloved uses to make his delicious rabbit casserole) “Hmm, forty Euros. I wonder if it’s worth it. Can it go in the oven?” (“Can it go in the oven?” the seller expostulates. “It’s the best thing you’ll ever find to cook in?”) 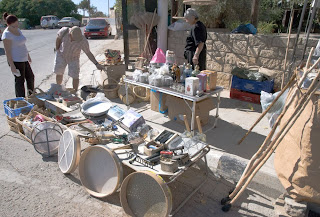 Fruit,vegetables, honey and cheeses from local farms and orchards; sheets, towels, and bedspreads from China; traditional local twig brooms, sieves, and mouse traps; and Cypriot goodies like lokoumades – deep fried donut balls sprinkled with flower syrup – and soujouko – nuts on a string dipped over and over into grape must; and a rash of cheap toys: the panagiri has everything, and we returned home with bulging paper bags and empty pockets. 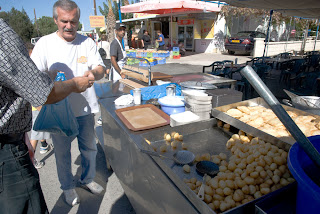 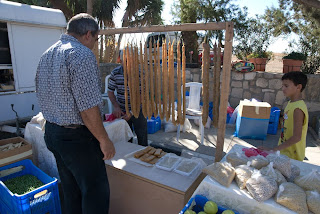 Once again I am facing a dilemma faced by countless parents down the ages: what do you do when your child is bullied?

I was bullied at school, and when it came from an adult (my fourth grade teacher in Australia took out Australia’s involvement in the Vietnam War on me and another American embassy girl by grading papers unfairly and making us the butt of countless classroom jibes), my mother stepped up to the plate and complained to the school – to limited effect. But when it came from my peers, I had to learn to deal with it.

Alex and Sophia suffered somewhat, but only at school. And we took them out of school anyway and home-schooled them for several years. Once they were eleven or so, they were independent and strong-minded enough to look out for themselves, and no-one dares look sideways at them today. Both are smart enough to avoid trouble, but each can certainly take care of themselves – and each other – if things do get physical.

But day after day Zenon and Leo come home from school or from Tae Kwan Do with bumps and bruises and stories of being picked on and beaten up by bigger kids either in the playground or in the dojang when the teacher is absent – a frequent occurrence (and don’t make the mistake of believing that a Cypriot martial arts class has anything like the structure, discipline, and respect that an Asian one has!)

Best Beloved has tried talking to teachers and coach, but the results have been minimal.

‘You have to figure this out for yourselves,’ I told the Littles yesterday at lunch. ‘Either by using your brains, making alliances, or somehow convincing the bullies that it’s not in their best interest to pick on you. Or with your fists and feet.

‘I’m not saying,’ I went on, soothing bruises with arnica and ‘make-it-better’ kisses for the umpteenth time. ‘That you seek them out and beat them up. But both of you have fighting skills. Try as hard as you can to avoid using them, but if Marios or Dimitris whacks you again, or trips you up, or punches you in the back, retaliate. And win. It should only take one episode. These kids are bullies. They pick on you because your different. If they know that they can make you squirm and cry, they will – because it makes them feel stronger. Once they learn that you can make them cry, they’ll leave you alone because they don’t want to be seen as weaker than you half-foreigners…’

Then, trolling my Facebook page this morning I found a Blog Post from the Voices Education Project, a non-profit organisation that I have been involved with for the last few years, dedicated to using poetry from soldiers and civilians to help people understand the trauma of war. Fyodor Dostoyevsky, author of the novels Crime and Punishment and The Brothers Karamazov, said: “At some ideas you stand perplexed, especially at the sight of human sins, uncertain whether to combat it [sic] by force or by human love. Always decide, ‘I will combat it with human love’. If you make up your mind about that once and for all, you can conquer the whole world. Loving humility is a terrible force; it is the strongest of all things, and there is nothing like it.”

So if I want to live that ideal, (‘Be the change that you want to see in the world’ – thank-you Gandhi) and I want my children familiar with it, what do I tell my young boys about dealing with playground bullies – to whom ‘loving humility’ is so much sissiness?