That time of the Year Again 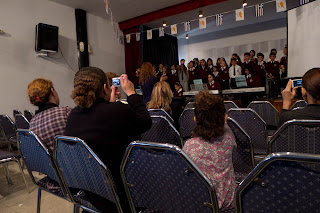 The whole nationalist/religious thing just hit me full on with the Littles' school assembly for the combined Get Rid of the Turks and Kick Out The English days which fall a week apart every year. March 25 is the anniversary of the Greek rebellion against the Ottomans in 1821, and April 1 is the anniversary of the beginning of the Struggle for Independence in Cyprus in 1955. I seem to remember that in previous years and other schools the assemblies were separate, but for the last two years Kouklia has combined them in a heaping jumble of 'Hurray for Greece!', 'Freedom or Death!' and 'With God on Our Side!' that is spoon-fed to children from nursery school up. Try a little hate and xenophobia before lunch, guys. But as my Sainted Father used to say 'Please don't confuse me with the facts!'

Under the former Head, assemblies were kept short and low tech, focussed on the students and their abilities and accomplishments: the reason for the assembly was almost peripheral in his day. But now, it seems to be 'We have Power Point and we're going to use it!' and 'We have an electric keyboard, so we'll play it loudly, even as it drowns the children's singing!' and 'Never mind if we have to fiddle with the mikes and they deliver ear-splitting bursts of feedback, lets use them!' I left after an hour and a half to go home and cook: the children were bored and restless and the parents were yawning and looking at their watches. Even the young actors and actresses couldn't wait to leave.

Oh the endless need to pick at hate! Does it make one prouder to be Cypriot when one endlessly hears and rehashes the miseries and injustices that one and one's people – and other people of a different race but who speak the same language and worship god in the same way – have had to endure? Isn't there a better way to engender pride in your people, your country, your tribe, race, family than to dwell on the hateful shortcomings of others?

As I said to K, the Belgian mother of Zenon's best friend, 'It's as if we, children in Europe 20 years after the end of the Second World War, kept festering the wounds of the German Occupation and the Blitz. As if the Germans reminded us each February, and re-enacted in every school the firebombing of Dresden, sparing tots none of the grisliest details...' as our children every year re-enact the horrible death of Grigoris Afxentiou – leaving out the inconvenient possibility that he may well have been betrayed by Grivas.

But maybe that's where the rub lies: because for Cyprus it has not been 'Eleftheria y Thanatos'; Cypriots were denied the choice of 'Freedom or Death'. The betrayal and dismemberment of this island lives still, and festers – in the endlessly played Blame Game of the Cyprus Problem, in the government's cynical manipulation of the families of the Missing, in the shelter and silence offered those who committed heinous crimes against neighbours during the dark days of the coup. What are the stages of grieving again? Denial, I remember, is the first...

And meanwhile, these fourth and fifth-graders, professing pride in their Greekness, shuffle to the microphone, their shirts untucked, their sneakers at odds with their grey trousers, the elastic supporting the tie of one who wore a t-shirt rather than a button-down stark against his tanned neck...

Doesn't pride start at home? In your appearance, in your school work, in the way you present yourself?

It makes me want to weep, or to gnash my teeth with frustration, when my eight year old rushes up to me and says: Did I do well? I have to assure him that he was magnificent. And then later I have to wrestle with the questions: Did the Turks invade us, or we them? And why? And did it hurt Afxentiou when he burned like that? And were the English really horrible – because some of my friends are English -- and you were from there, weren't you? 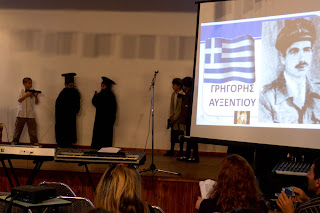 Posted by Asproulla at 2:16 PM No comments:

Out of the Mouths of Babes

Yesterday Best Beloved received a phone call from the Littles' headmaster. The teacher first explained that Leo was in detention because he had repeatedly left behind his books and pencils, and had neglected to remind me to sign things – all this despite my asking him each day morning and evening if all was in order with his papers, pens, and notebooks. Then, taking a breath, he plunged into the second reason for his call.

Zenon, he reported, had stood in front of the entire school, teachers, helpers, and local health inspector, and told them that the entire family except himself, were HIV positve and carried AIDS.

Was there any truth to this? The headmaster wanted to know...

Best Beloved assured him that there wasn't.

The conversation ended, and BB scratched his head, wondering if this were a new ploy of Zenon's to win attention and set himself apart from the crowd.

Then the penny dropped and BB called the headmaster back.

“I think,” he said. “With respect to our recent conversation, that Zenon was confused between HIV and the Thalassaemia trait. You see, I carry the trait, and while my wife does not, all of my children – except possibly Zenon – do.”

On Zenon's return, I quizzed him as to his remarks, and found that he had indeed confused the two conditions. I just hope that this is the end of the story – that some child has not gone and repeated the assertion at home, and that some parent does not insist that we all undergo tests and display the results on the school bulletin board as had to happen when a friend's child was rumoured to have TB.

Not that I am averse to being publicly tested, I just don't need the hassle right now.